I have been writing the music for South Western, the brand new show from the Wardrobe Ensemble which premieres at Tobacco Factory Theatres later this month. In this blog post I will talk about the instruments used in the show and the inspiration behind them.

I’m an associate artist of The Wardrobe Ensemble and I wrote and performed the music for previous shows from the company, including 1972: The Future of Sex and Wind in the Willows.

I’ve spent the past four weeks in my usual ‘music corner’ surrounded by instruments, well mostly guitars actually, in all different shapes and sizes. From lap steel to mandolins, acoustics to electrics, I’ve been playing with every sound possible that a guitar can make. At the moment the biggest influence on the music in the show is Ennio Morricone for his epic western scores on classics like Good, The Bad and The Ugly and A fist Full of Dollars. If you want to listen to some of the artists we are enjoying in the room check out this Spotify playlist – https://spoti.fi/2MkesQW

When discussing the music for the show two questions came to mind. Firstly how American can it be? E.g. Banjos and fiddles, like Old Crow Medicine Show. And how British should we go? E.g. Guitars and violins, like Nick Drake. The answer to both seems to have landed in knowing we don’t want cheesy country or folk, but it still too early to write off vibes.

Either way I have started with the guitar. Not only is it at the core of both American and British song writing, it also happens to be the instrument I compose with. So I went ahead and bought a few different guitar slides, researched some cool tunings and even bought a cello bow in an effort to make as many sounds as possible from the iconic ‘six string’.

Now for a breakdown of the instrumentation I will be using live, hopefully I don’t get too nerdy…

On one side I have an acoustic guitar tuned to DADGAD, which is a typical tuning for playing transatlantic folk music and gives the tracks a really cool modal sound. Going forward I can see room for it to take the foreground and be performed with minimal or no backing.

Next is an electric guitar with a cello bow, that when bowed slowly through lots of reverb and delay effects it sounds really trippy and will be great for darker drones or bass layers. This is a really fun way to play the guitar and when using harmonics it can sound like horror film screeches. I can imagine this instrument being very useful in arrhythmic scenes to make an ambiguous or haunting atmosphere.

On the other side is a baritone electric guitar. Without getting to nerdy it is essentially a lower pitched electric guitar that is often used on country and western productions. When played with a tremolo arm it can give an instant feeling of epic American weight and will be really useful for creating motifs and character themes.

And lastly is the lap steel, which sits right in front of me on its three legs. This instrument is played horizontally using a bottleneck or bullet slide. Its sound is so American when played in different styles it can take you from Delta Blues to Nashville Country in a few notes. This will come in really handy when needing to inject some USA into what could be produced as a British folk song.

This is not the full instrumentation, as I am recording backing tracks to accompany the performance that include harmonica, mandolin, orchestral drums, violin and piano that will be triggered via Ableton Live. I might be juggling guitars throughout the performance of this show but I can’t wait to get it up on its feet as this is going to be a very fun show to play.

So about a month ago, my good friend and musical brother Jamie Cruickshank mentioned he had just been asked to go on tour with Lucy Dacus for two and a half weeks across Europe. (If you haven’t heard either of their music, you should, they are both awesome!) He was obviously super stoked and mid-high-five I asked him “do you need a bass player?” he said yes, and so began a very exciting musical adventure.

Firstly I should give you a little bit of background before I get into the tour. Most people reading this probably already know that me and Jamie have been playing music together all our lives. We learned to play guitar together throughout school, we played our first song together aged 8 (Can’t Stop by Red Hot Chili Peppers) and we have written/played in bands together since day one. But recently we have been making a lot of our music apart for various reasons, so this was the perfect chance for two music mates to reunite and thrash. 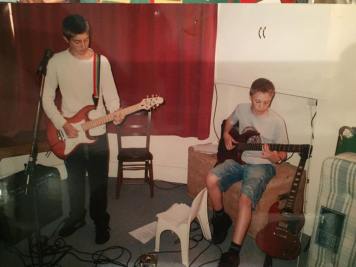 The tour started early doors, like, before sunrise in Bristol. We loaded up my yellow VW Transporter with all the backline (amps, drums, guitars, etc) and got on the road to Oxford. We swapped out my old banger for a sweet tour bus and were back on the road to London to pick up Lucy and band before midday. We all got on great, and within a few hours we were pals on tour. We played a number of shows across the UK, some stuff happened; the van got broken into, a passport got stolen and we played some sold-out gigs. But overall it was exactly what I was expecting, fun and tiring and British, so it flew by. I was ready to hit mainland Europe and see some cities I’d never been to before.

First up was a whistle stop tour of Paris; Notre Dame, Eiffel Tower and a Croque Monsieur. But most notably I met my travel companion and glass vessel of power “Jean Bottely”. Initially a souvenir and non-plastic drinking container, this bottle became a silly tour joke and Insta celeb in seconds. I’m still amazed I didn’t lose him (thanks Ricardo). 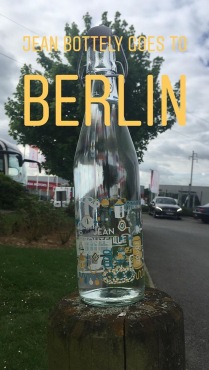 Berlin was next, and I’d heard a lot about how cool the place is. Genuinely it was very cool. We were playing in the middle of this huge market, it felt like a festival but it was just another normal day for the German peeps. The gig was guten and we even managed to catch a set by our good friend Fenne Lily and her awesome band. The coolest bit about Berlin was staying in the countryside on its outskirts. We were in this picturesque old farmhouse, our host treated us to an amazing breakfast spread and we jumped in her lake! Check my insta for pics.

I think we went to Copenhagen next, so we caught a ferry across the Baltic Sea. Denmark is very stylish, but expensive. Kinda just like Ikea but without a bargain corner. (If this is what post-Brexit Britain has coming then buy your blankets now because Hygge is spenny.) A band called The Wild Forest supported and we ate at a Mexican taco place that features in Ugly Delicious on Netflix.

Here are some pics of us performing: 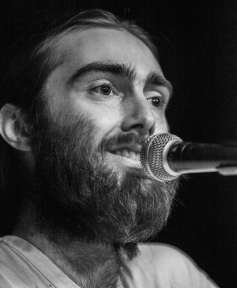 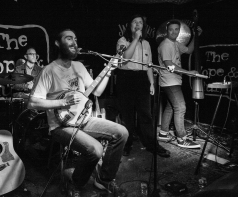 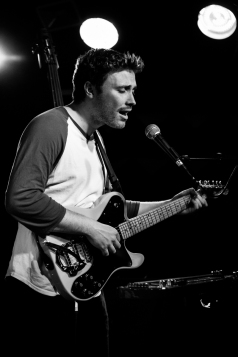 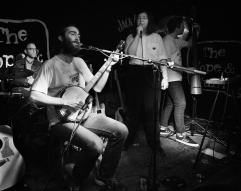 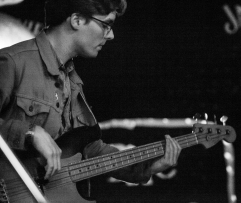 All photos by Duncan Cruickshank @duncspix

The next day we drove back to Germany for a gig in Hamburg, and the venue was absolutely beautiful. The sound man assured us we were in the roof of the first movie theatre in Germany originally built for the princess in 1906. There were cherubs literally everywhere. The gig was great and Jamie was almost out of CD’s! 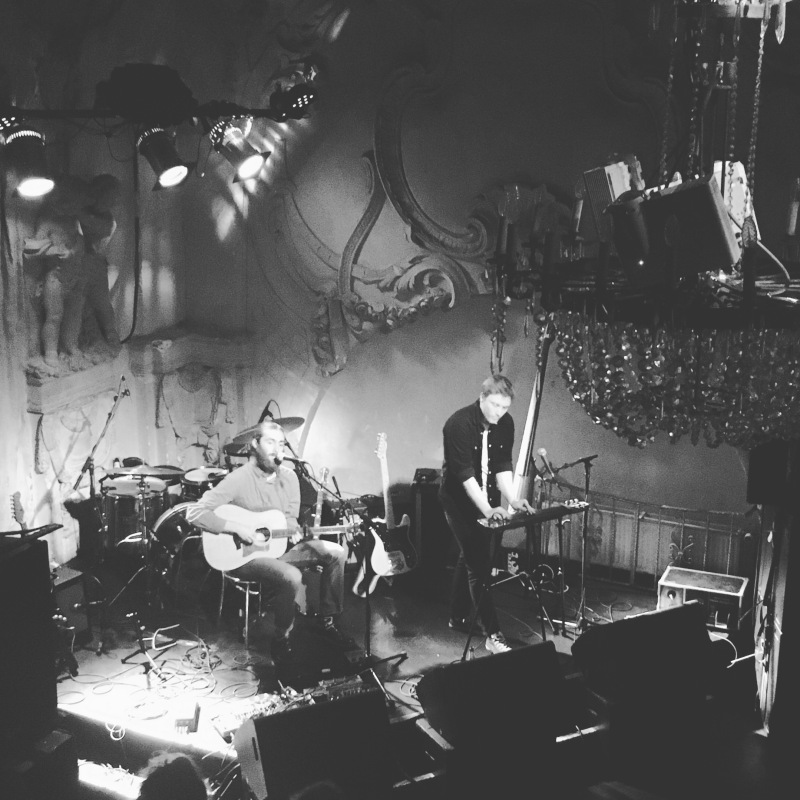 Next up was Brussles, and by this time we had driven through Belgium already but didn’t get to eat a waffle. That was all about to change. Lucy was scheduled to support a band called Ought at a festival in the centre of the city. It was actually in this amazing orangery surrounded by beautiful gardens and skyscrapers. This gave me and Jamie a day off so we thought we would explore, after a nap that was… We didn’t wake up so instead celebrated Lucy’s birthday at Grand Place with Prosecco and Belgian chocolate cake! More pics here.

After witnessing Manneken-Pis in all his glory it was time to drive back into Germany and play our penultimate show in Cologne. This was probably the oddest venue as it was Shell (the fuel company) themed. Like, if you had collected branded oil and gas based products in the colour blue and thought, “I can make a music venue out of this stuff” and did it. It was madness. Adding to this was the fact it was so close to the tram lines that every time one went by the electricity would surge and the lights would start flashing. It caused one poor lady to faint and an ambulance arrived between our sets. Anyway, we ate our bratwurst and drove off to the Netherlands with only a few pairs of clean pants left. 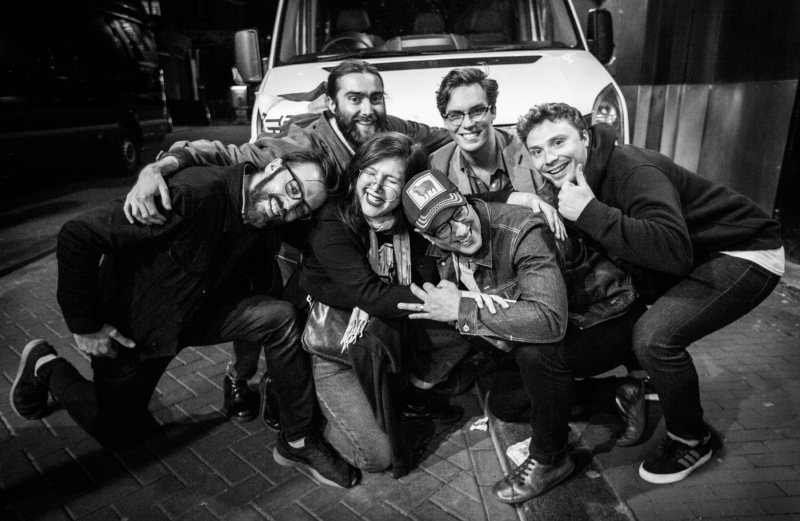 The final show was in Amsterdam and after two weeks for us (two months for the yanks) we were exhausted. Both Jamie and Lucy had sold out of their new records and it happened to be a national holiday in Dam so everyone was out celebrating WW2 liberation day. All in all the show was great, in a small way it encompassed the whole tour as Lucy and band all joined us for our last song. A cover of Alex G’s Bobby with everyone up and supporting each other.